A really scrummy lemon cake, with a centre of slightly sweetened cream cheese.
The whole cupcake is enswirled with a slightly tart lemon juice based mousseline buttercream then drizzled with melted white chocolate.
....It tastes EXACTLY how it sounds! 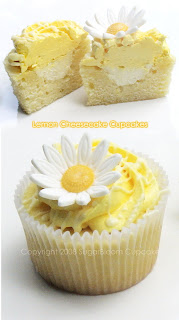 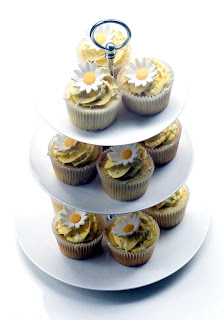 METHOD
In a medium bowl, lightly combine the egg white, vanilla and one quarter cup of milk.
In a large mixing bowl combine the dry ingredients and  mix on low speed for 30 seconds to blend.
Add the butter and remaining 3/4 cup of milk.
Mix on low speed until ingredients are moistened then increase speed and beat for 1 and a half minutes.
Scrape down the sides, gradually add egg mixture in three parts beating for 30 seconds between each addition.
Scrape down the side to ensure even blending.
Line 2 x 12 hole cupcake trays with bake papers and using a standard ice cream scoop, distribute the mixture evenly.
Bake in a moderate oven for between 18 and 20 minutes   Depending on the heat of your oven this may be more or less - do not let them over cook. Cakes will be cooked when they spring back lightly to the touch.
Remove from oven and allow to sit in trays for about 3 minutes, remove from trays and allow to sit on a wire cooling rack until completely cooled.

METHOD
Prepare a greased 1-2 cup capacity heatproof jug.
In a bowl beat the yolks with an electric mixer until light in colour.
Combine the sugar and water in a small saucepan (preferably non-stick) and heat, stirring constantly until sugar has dissolved and the syrup is boiling. Stop stirring and boil to the soft-ball stage of 115 degrees C (238 deg F).
Immediately transfer syrup from saucepan to greased jug.
In a thin steady stream, add the syrup to the beaten egg yolks, (don't allow the syrup to fall on the beaters or it will spin off onto the side of the bowl.)
Beat the egg yolk mixture continuously until COMPLETELY COOL.
Add a little colour paste to tint the buttercream yellow.
When cool, gradually add the butter followed by the lemon juice and zest.  Place in an airtight container until ready to use.

Using a small serrated knife, cut a cone shaped piece of cake from the top of each cupcake. (No need to reserve these pieces - they never make it past the kids anyway :))
Using a piping bag fitted with a 1 cm piping tip, pipe enough cream cheese mixture into each cake hole, level to the top of the cake.
Using a clean piping bag and tip of your choice (I used a large closed star tip by Wilton) pipe on the lemon buttercream, starting from the middle of the cake making a swirl out to the perimeter.
Melt some good quality white chocolate and drizzle over the top of the cupcakes.
( I find it easier to place all the cakes very close together and drizzle the chocolate of the entire amount at once - less fiddly and less waste.)
I made some pretty daisy type flowers for the top of each cupcake, but go ahead and place whatever you wish to the top of the cakes.
Here are a few ideas.....
Candied lemon peel dipped in caster sugar
Citrus Jelly Slices
A small sprig of baby mint leaves
Home made or store bought sugar decorations.

I hope you enjoy these little cakes :))
xox Bev

Posted by Sugarbloom Cupcakes at 6:32 PM